Shirodhara is a treatment done over the head especially over the forehead in which the medicated liquids are poured in a gentle stream over the forehead of an individual. This is carried out for a particular time and can be done in many sessions depending on the condition of the disease and diseased.

Shirodhara is used for ages in a variety of treatment conditions like sinusitis, hair loss, greying of hair, allergic rhinitis, tinnitus, vertigo, insomnia, memory loss, and other neurological disorders. It is found helpful even in Meniere’s disease and certain skin diseases. But it is mostly preferred in conditions like stress and anxiety.

Individuals are made to sit comfortably on a chair and herbal oil massage is done over the head and then he/ she is made to lie down in a supine position on the Shirodhara table. The eyes of the individual are covered with cotton to prevent the entry of liquid into the eyes. From a particular distance, the liquid is made to flow from the pot which is placed over the forehead in an oscillatory way. The liquid is again collected, made warm, and poured again; this procedure lasts for around 60 to 90 minutes depending on the condition. The procedure in Ayur Healthcare is done under the guidance of the experienced and knowledgeable Panchkarama B.A.M.S, MD doctors to prevent any complications. 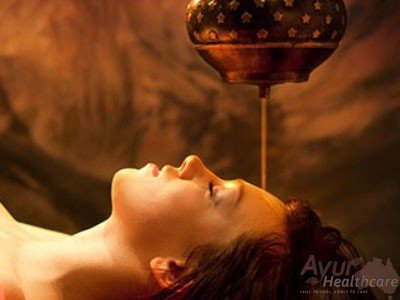 Shirodhara normalizes the functions of hormones that regulate sleep and emotions by relaxing the hypothalamus in the brain. It also makes the individual strong and immune to physical and mental stress and thus prevent many life-inducing psychosomatic illnesses. Shirodhara works on the hypothalamus of the head which can be correlated to the roots of the trees. If the roots are healthy then the chances of the tree being healthy are more. The head controls the entire body mechanics and dynamics. The calming effect produced by Shirodhara can be correlated to the effect obtained with meditation.