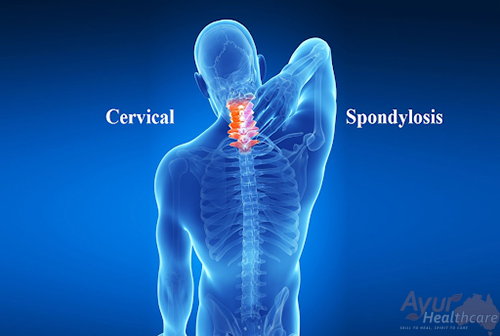 Cervical Spondylosis (Ayurvedic Name- ‘Griva Sandhigat Vata’) is most common disorder of Cervical Spine. nowadays, Cervical spondylosis is a medical term which denote the age-related Tear and Wear, which usually affected the Bone (Vertebrae) Joints and Disc of the Neck (Cervical Spine). Men and Women who are above 40 years, are prone for this disorder. Here the Term means

Spondylosis is considered as degenerative condition in Spine such as bone spurs(Bony projection that develops along bone edge) and degenerative intervertebral discs, can occur in the Cervical Spine( Also called Cervical Spine), Thoracic Spine (Upper and mid back) or Lumber Spine(Low Back) where Spondylosis is the medical used for Degeneration and Spondylitis is used for inflammation of one or more vertebrae, such as Ankylosing Spondylitis.

In General, Cervical Spondylosis is a specific type of Arthritis, which occur in vertebral column at neck region including with connective tissue and Ligament structure and that leads to change in the cushion (Intervertebral Disc) between the joint of the neck and the neck-bone. Due to this movement of neck get restricted and edge of vertebrae get damaged.

When vertebrae get affected, this change increase pressure on nerve originating from Cervical Vertebrae. This condition is co-related to ‘Snadhigata Greeva’(Also called Osteoarthritis of Neck).

-Heavy load on the neck and shoulder in daily routine, pressure on neck can cause cervical spondylosis

-Loss of Elasticity in cervical and spinal disc.

-Stiffness in the ligaments connecting neck bones and muscles.

In some case, there may be no symptoms initially but when symptoms start manifest, they typically affected only the Neck region.

– Tingling and Numbness in arm region, weakness in hands, legs and feet due to narrowing the space between the spinal cord and nerve root.

– Stiffness in neck with restricted movements of neck

-Loss of Balance with anxiety.

In Ayurveda Scripture, Cervical Spondylosis can be co-related with ‘Griva Stambha’, which literally means Stiffness in the Neck Region, or ‘Griva Sandhigata Vata’, means ‘Vata Dosha’ get vitiated and got lodged in the neck region and causes Pain and Stiffness cervical region which lead to restricted movement of neck.

Obstruction of ‘Vata’ due to malfunctioning of ‘Pitta’ and ‘Kapha dosha’

Vata’ aggravation due to some degenerative problem which is called as ‘Vata’ increase in-dependently.

Ayurveda explained Cervical Spondylosis affected the both Lumber Spine and Sacral Spine, and Sacrum is situated in ‘Vata’ area of the body and as we know, here ‘Vata’ vitiation caused by Aam(Toxin, Ayurveda strongly believes every ‘Dosha’ vitiation done through the toxin formation) which causes the stiffness and reduce the mobility in this area along with the depletion of the body’s tissue. Due to all these degenerative activities, disc degeneration occur which bring Cervical Spondylosis.

In Ayur Healthcare, first line of treatment is balance of ‘Vata Dosha’, treatment including detoxification therapy and elimination of ‘Ama’ with ‘Vata’ pacifying Diet, Lifestyle and Herbal preparation.

Treatment like ‘Panchakarma Therapy’ used in the severe cases and for mild case we use internal Herbal Medicine and external application which aimed at restoring the equilibrium through correction of the underlying functional in-equilibrium.

As per Ayurveda, ‘Swedan Therapy’ (Hot Fomentation) is highly useful in ‘Vata-Vyadhi’ (Disorder of ‘Vata Dosha’). Here ‘Greeva Stambh’ is caused by ‘Vata Dosha’, So this therapy is highly recommended.

Sour Diet is strictly prohibited, particularly Curd. Fried food, Pulses and various preparation of Pulse is contraindicated. Wheat diet is better than Rice, consumption of bitter vegetable like bitter variety of Drumstick and bitter gourd are very useful. Use comfortable posture while writing and reading. Morning walk helpful in this condition, but if it is cold outside the patient should always a woollen scarf around the neck region. Take a hot, long duration of shower every day if possible.