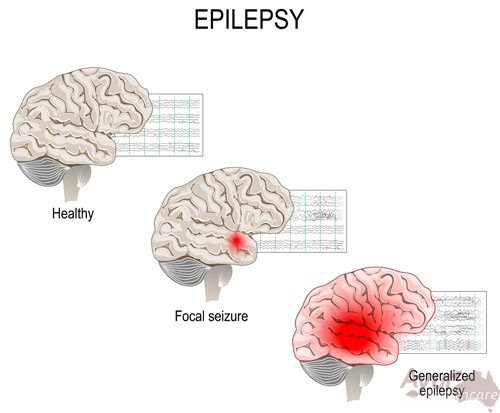 Epilepsy is Central Nervous System (Neurological) Disorder, in which Brain activity become Abnormal causing Seizures or provide of unusual behaviour, sensation and sometimes loss of awareness. Epilepsy may occur as a result of a Genetic Disorder or an Acquired Brain Injury, such as a Trauma or Stroke.

-In General, Epilepsy is a condition in which a person has recurrent Seizures. A seizure is defined as an Abnormal, Disorderly Discharging of the Brain’s Nerve Cells, resulting in a temporary disturbance of Motor, Sensory, or Mental Function or episodes of abnormal Electrical activity within the Brain result in Seizures.

-There are two main types of Seizures, Generalised Seizures affect the whole Brain. Focal, or Partial Seizures, affect just one part of the brain. A Mild Seizure may be difficult to recognise. It can last a few seconds during which you lack awareness.

-Stronger seizures can cause spasms and uncontrollable muscle twitches, and can last a few seconds to several minutes. During a stronger seizure, some people become confused or lose consciousness. Afterward you may have no memory of it happening.

Possible causes of Epilepsy are…….

– Scarring on the Brain after a brain injury (Post-Traumatic Epilepsy)

– Stroke, which is a main cause of epilepsy in people over age 35

– Lack of oxygen to the Brain

– Maternal Drug use, Prenatal injury, Brain-malformation, or Lack of oxygen at birth

– Infectious Diseases such as AIDS and Meningitis

– Twitching or Trembling of Muscles

– Stiffening of Body, Shaking and loss of bowel control
-Biting of Tongue with loss of Consciousness

In Ayurveda literature, Epilepsy is referred to as “Apasmara”. As per Ayurveda, Epileptic Seizures are categorised into four types-

– Vataj (occur due to vitiation of Vata, Seizure last relatively for shorter time, increase respiratory rate, cause more secretion of foam from mouth and abnormal body movements during fits.)

– Pittaj (vitiation of Pitta, cause yellowish or reddish tint on body, lot of sweating, the foam coming from mouth is also yellowish, patients’ experiences hotness in body and severe thirst after the seizure.)

– Kaphaj (vitiation of Kapha, Seizures last for relatively longer time, the foam is whitish in colour while patient experiences heaviness in body)

So, Epilepsy is a disease that results in seizures associated with loss of consciousness.

– Ayurveda believes that there are two basic factors have been implicated for the aetiology of Epilepsy.

– Exogenous factors like intake of unwholesome and unhygienic foods, Aggravation of Vata Dosa due to Trauma.

-The only first-aid measure recommended in Epilepsy is Blood-Letting (“Siravedha”) from the Veins of the Temples. Cauterisation of both the parietal bones with needles (Called ‘’Soochivedha’’) has also been mentioned.

– At Ayur Healthcare, we use ancient Ayurvedic wisdom blended with the latest scientific research to provide immediate and long-term relief to the epilepsy patients. We focus on balancing the Doshas which are the root cause of epilepsy. Our Ayurvedic line of treatment significantly reduces the severity and frequency of the seizures. Our research-based Ayurvedic products and natural treatment protocols for epilepsy have been the cornerstone of our success in giving the best treatment to the epilepsy patients globally.

-Ayur Healthcare provide proper screening of patient, Our Ayurvedic methods target the root cause of epilepsy which is the imbalanced Doshas. Ayurvedic treatment supports the desired coordination of various parts of the brain with the help of Herbs, Minerals, and Classical Drugs.

-When above mentioned medications are given to the patients, there is a significant reduction in seizure frequency from the very first dosage. Further, the ‘’Akshepashaman’’ (Means Antidote) medications act similar to the Modern Anticonvulsants, however, without any side effects.

-The herbs like Mandukaparni (Centella asiatica), Yashtimadhu Churna (Glycyrrhiza glabra), Guduchi (Tinospora cordifolia), Shankhpushpi (Convolvulus pluricaulis) are given in a specified dosage with Akshepshaman medicines (anti-epileptic) that result in effective outcomes. Also, medicated Ghrita is often used for the treatment of Epilepsy as it works quickly by crossing the blood-brain barrier.