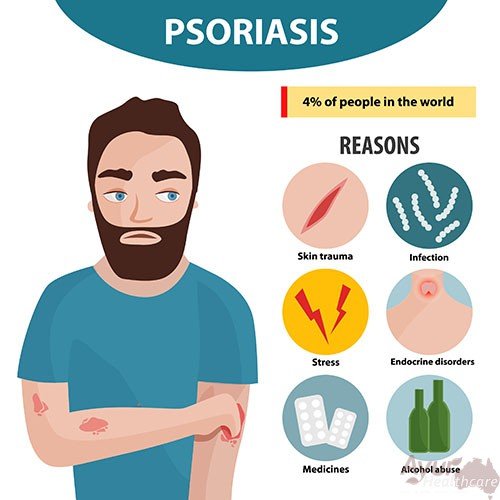 How Psoriasis is caused ?

As it is an auto immune disease ones own immune system starts attacking each other and disturbs the entire immune mechanism in the body. In psoriasis the adverse effect is exposed on the skin making the epidermal cells to proliferate in excess. According to the current researches stress factors, insomnia, improper diet and lifestyle are the main triggering factors for psoriasis which even flares up the existing condition.

Skin with red or pink thickened multiple patches associated with dryness, itching, dandruff kind of silvery white scales or plaques on the patch and tend to bleed when tried to pull the plaque out. In rare and chronic  cases the patch can even be in grey or black in colour. Psoriasis can also be seen on scalp region and referred as scalp Psoriasis. It may mimic with other scalp conditions like dandruff or seborrheic dermatitis. In chronic conditions pitting of nails called ‘oil spots ’and joint pains called ‘Psoriatic arthritis’ are also observed.

What Ayurveda speaks about Psoriasis…..

Ayurveda deals with all the skin diseases under the nomenclature KUSTA. Kusta are divided into 2 major categories according to the classic text of Ayurveda called Charaka samhitha, as Maha kusta and kshudra kusta which are total 18 in number. Eka kusta and Kitibha kusta are one among kshudra kustas which resemble to the features to Psoriasis in modern era. Imbalance among all the three humours and  vata, pitta and kapha vitiate other tissue components of the body like twak (skin), Rakta (blood), Mamsa (muscle tissue), ambu (lymph/plasma) are the pathogenic factors for 18 types of kusta. Among these Eka kusta and Kitiba kusta are caused when vata (air element) and kapha (mucous element) become morbid.

The Characters of Eka kusta  will be absence of sweating or dryness or patch, plaques resembling the skin of fish and extensive localisation. Where as blackish brown colour rash which is rough and touch like a scar tissue describe the feautres of kitiba kusta in classical texts of Ayurveda.

Management of  Psoriasis through Ayurveda…

With all the confidence Ayur Healthcare can say Psoriasis is well managed through Ayurveda only and the world even accepted this.