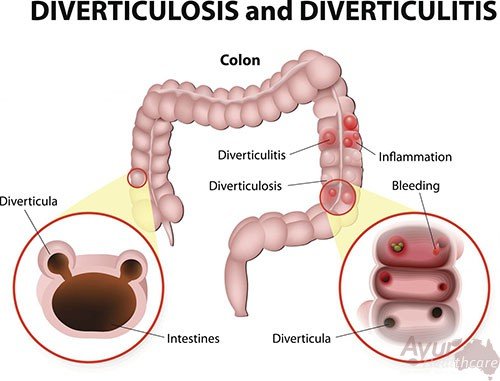 Diverticulitis is a chronic gastrointestinal tract condition in which pockets like structure (also known as a ‘Diverticula’) formed as a weak point in Mucosa and sub mucosa layers of the colonic wall. Here the Term ‘Diverticula’ represent the small sized pockets in the intestinal walls, usually occur in lower part of the large Intestine (Colon) are quite common in people who are above age of 40 yrs. without causing serious problem.

Diverticulitis can lead to perforations or tears which create infections, blockage and sometime bleeding due to protruding pockets that can create in bring down piece of digestive organ. Gentle instance of Diversities cab be treated with sound eating regimen and complete rest, yet there is some special medicine required.

-In General, thickening of the muscular layer due to deposit of collagen and elastin of colonic wall have been consistently observed in ‘Diverticulitis’. It is believed that this imbalance of structure affects both mobility, increased intraluminal pressure and effectiveness of peristalsis with Irritable Bowel Syndrome.

Main cause of Diverticulitis is obscure to present day restorative science but it is said to be the formation of high pressure on the walls of the colons from inside are possible causes of this condition.

– Being Overweight may be the reason.

– Smoking or long-term conception of Alcohol.

– Lack of Physical activity or Exercise

-In some case, chronic stage of fistula may be the causative factor of Diverticulitis

– Moderate to severe pain, usually in lower left side of the abdomen

-Malaise or Headache may be present

-Chills may be present with fever

In Ayurveda wisdom, Digestion is the key to health and all disease ultimately is a result of poor digestion that is explained as ‘Mandagani’, and come under the ‘Udara Roga’ (Disease of Digestion System) and here are prime symptoms is Abdominal Pain.

– According to Ayurveda, ‘Vata Dosha’ is vitiation is major sign of Diverticulitis in the human body, Due to improper elimination of waste or improper digestion of the food in the body, the toxins formed and get accumulated and leads to imbalanced or vitiation of ‘Vata Dosha’ along the other ‘doshas’ in the body

– Ayurveda further explained ‘Vata Dosha’ accumulate and become aggravated in the Colons (Purishawaha Shrotas). ‘Apan Vayu’ is subtype of ‘Vata-dosha’ and due to downward movement, it blocked. ‘Vata’ moves sideways in Cardiac region, Urinary Bladder and Anus and suppresses the power of digestion. Overflow moves in to the Mucosa/Lymph (Rasa/Kapha) and Blood (Rakta). Vata moves in the colons as the site of relocation where it manifests and Diversifies.

-Vata Dosha unable to more downward continue to push sideways (Vyan Vayu) on the colons increasing pressure on the muscular wall of colons causing the pouches to form. ‘Vata’ pushes ‘Pitta Dosha’ resulting the inflammation and infection with possible bleeding.

In Ayur Healthcare, first line of treatment is increasing power of ‘Agni’ (Digestive fire) which promotes the Healthy function of the gut.

Do not hold natural urges, because as per Ayurveda, natural urges is signal to the an individual to act, need to be attended immediately. suppression of natural urges will lead to constipation.