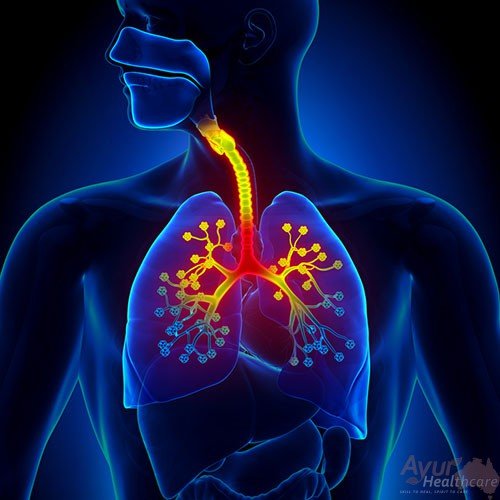 Bronchitis (Ayurvedic Name – Tamak Shwash) bronchial tube or Bronchi is the Air- Tube or Air passage way, which carry the air to lung in Human Body and when it gets inflamed or Swollen then you end up with nagging cough and mucus, this condition called ‘Bronchitis’. In this same way Bronchitis is co-related to ‘Swas Pranali Shotha’ in Ayurveda, where ‘Swas- Pranali’ means Bronchial Tube, ‘Shotha’ means Inflammation.

Bronchitis may lead to Bronchial Asthma if untreated, is characterised by Hyper responsiveness (An abnormal degree of responsiveness, as to a physical or emotional stimulus) of Trachea -Bronchial smooth muscle to a variety of Stimuli(Contraction of tracheal smooth muscle), resulting in narrowing of Air tube, often accompanied by increased secretion and Mucosal Oedema(Airway Inflammation).

[Note-Trachea divided in to the right and left main Bronchi]

-In General, Bronchitis is a medical term which represent the inflammation in the Bronchi or Larger Airway of the Lung, may be due to infection or may be other immune process in the Lungs but as per aspect of symptoms of Bronchitis overlap with characteristic of Asthma.

Main difference between the Bronchitis and Bronchial Asthma is asthmatic cough is usually productive and brought up the sputum but in bronchial cough is non-productive with no sputum.

-Virus or Accumulation of Toxins in tissues blocking circulation

Commonly known as chest cold or short-term illness, followed by cough, cold and Viral infection, usually it may last from a few to 8 to 10 days. It is more common but it’s doesn’t usually cause problem past that. Acute bronchitis may include

Chronic Bronchitis is more serious condition, its keep coming back and doesn’t go away easily, also called as long-term illness, defined with productive cough with excessive mucous, it may be last for 3 month or more, it may be associated symptoms with COPD (Chronic Obstructive Pulmonary Disease).

– Constant cough with Mucus (White or Yellow or Green)

– Shortness of Breath or Difficulties in Breathing

– Wheezing or Whooping cough (Whistling sound at the time of Breath)

– Chest Discomfort or Congestion, feeling of full or Clogged

According to Ayurveda, ‘Swas Pranali Shoth’ happens due to primarily impaired Digestion. Impaired digestion caused by the formation of ‘Ama’(Toxins) which is resulted from imbalanced state of Tridosha I.e. Vata, Pitta and Kapha dosha, and mainly in this condition Vata and Kapha dosha are aggregated.

[Note- Vata, Pitta and Kapha are three Dosha in Human Body, which controls the functioning of the Body.]

Ayurveda explained the difficulty in Berthing and Shortness of Breath as ‘Tamaka Swasha’ which is co-related to Bronchial Asthma. Its explained as Chronic Inflammatory disease of airway, lead to recurrent wheezing, Breathlessness, tightness of chest and cough particularly at night or early morning.

As per Ayurveda, ‘Swasa’(Breathing) is mainly caused by the Vata and Kapha doshas. Swasa-Roga(Disorder of Respiratory System) is broadly classified into five types

In Ayurveda, ‘Tamak Swasa’ is allergic condition from the reaction of the Body to one or more allergen and is the one most fatal respiratory disease and its seat of manifestation is the Lung

Ayur Healthcare, first line of treatment is balance of Vata and Kapha dosha, because it is Vata- Kaphaj disease means use of those herbal drugs which have property to pacify the vata and Kapha dosha and bring them in the order or Balanced state. Treatment Mainly include

Abhyanga, Herbal oil massage with specific medicated oils that is individually prepared as per the patient condition and constitution to provide a deeply soothing and balancing effect for the entire physiology.

Treatment open the channel of Circulation and elimination of Toxins, so proper nourishment will reach to the tissue to aid their repair and development.

Alcohol and Tobacco is contraindicated, food which is easily digestible, should be preferred. Cold Diet like ice-cream, cold drink and Sour food items like pickle and Curd should be avoided. Avoid Stress or Tensions. Practice Respiratory Exercise advised by the physician, Pranayam, Yoga etc. Use Lukewarm water and Goat Milk, if available.