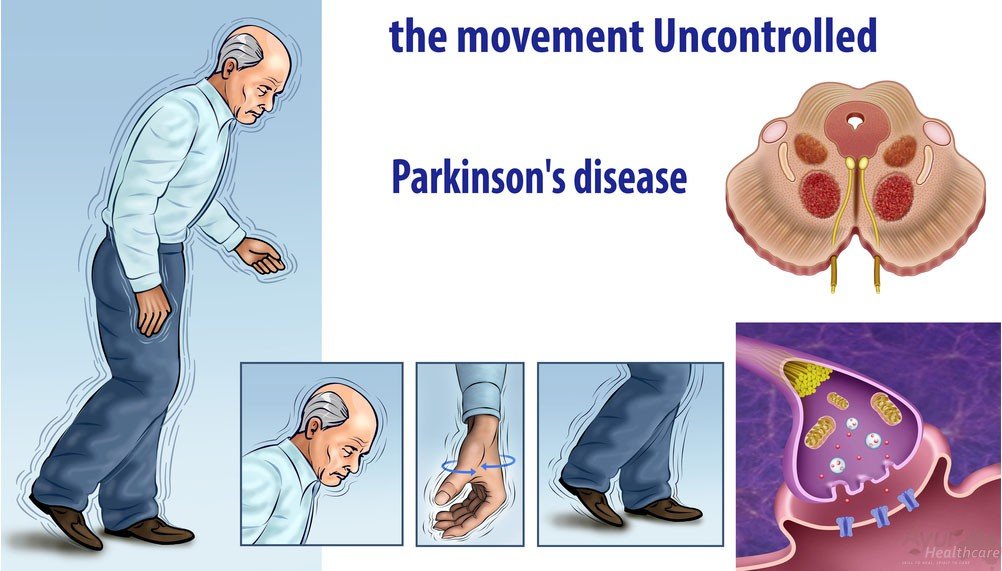 Parkinson’s disease is a progressive nervous system disorder that affects movement. Symptoms start gradually, sometimes starting with a barely noticeable tremor in just one hand. Tremors are common, but the disorder also commonly causes stiffness or slowing of movement.

-In General, Parkinson’s disease (PD) is a neuro-degenerative condition, an illness that affects nerve cells in the brain that control movement.

– Parkinson’s disease is also known as ‘The Shaking Palsy’ , James Parkinson described three major symptoms as Tremor, Muscular rigidity and Hypokinesis, here shaking palsy is same as Parkinson’s disease, a nervous disorder characterised by a trembling of the limbs at rest, lessened muscular power and a stooped posture associated with a propulsive, festinate gait (deficiency of dopamine in the basal ganglia circuit leading to motor deficits).

– Hypokinesis described as slowness in initiating and repeating voluntary movements, despite normal muscular strength, there is either defective release or impaired postsynaptic response to neurotransmitter in the corpus striatum.

– With Dopamine deficiency, there is acetylcholine hyperactivity. This may be mechanism for Parkinson’s symptoms.

Possible causes of Parkinson’s disorder are…….

-The cause of Parkinson’s disease is unknown and significance of genetic factor is being debated. A research has shown that MPTP (methyl-phenyl-tetrahydropyridine) caused severe Parkinsonism in young drug users. This has generated a belief that the disease might be occurring due to environmental toxins, some evidence also suggest that Parkinsonism is more common in country areas.

– Tremor – A tremor, or shaking, usually begins in a limb, often your hand or fingers. You may a rub your thumb and forefinger back-and-forth, known as a pill-rolling tremor. Your hand may tremor when it’s at rest.

– Slowed movement (Bradykinesia). Over time, Parkinson’s disease may slow your movement, making simple tasks difficult and time-consuming. Your steps may become shorter when you walk. It may be difficult to get out of a chair. You may drag your feet as you try to walk.

– Rigid muscles. Muscle stiffness may occur in any part of your body. The stiff muscles can be painful and limit your range of motion.

-Impaired posture and balance. Your posture may become stooped, or you may have balance problems as a result of Parkinson’s disease Loss of automatic movements. You may have a decreased ability to perform unconscious movements, including blinking, smiling or swinging your arms when you walk.

– Speech changes. You may speak softly, quickly, slur or hesitate before talking. Your speech may be more of a monotone rather than with the usual inflections.

– Writing changes. It may become hard to write, and your writing may appear small.

In Ayurveda literature, Parkinson’s is co-related with ‘Kampavata’
(Note- Here Kamapa means Tremors, caused by vitiated Vata Dosha)
– Ayurveda further added, in old age Vata Dosha is more predominant in the body. This Vata relocates in the brain and dries up the brain cells leading to tremors and instability. Parkinson’s disease reflects massive vitiation of Vata which occupies almost all channels of body. Weak digestive fire, disturbed digestion and presence of toxins (Ama) are generally observed in the patient at gastrointestinal as well as cellular levels, which provide conducive environment for vitiation of Vata.

– Ayurvedic Medicines like Digestive herbs, in conjunction with nerve tonics are administered to restore digestive function both in the gastro intestinal tract and at a cellular level. Specific diets and regimen are advised. Parkinson’s disease treatment in Ayurveda provides special Neuro-Rasayanas which stimulate neurotransmitters and helps in overcoming problems as well relaxing the mind.

– At Ayur Healthcare, to arrive at a precise Parkinson’s disease treatment, our doctor considers all of these causes and consists of a combination of internal and external application of Ayurvedic Medicine

– Usually a set of decoctions (Herbal Medicinal drinks) is given. At the beginning, Decoction should contain ingredients to achieve a balance of Vata Dosha; later the decoctions should have nutritious or rejuvenating value. The Decoctions contain Masha (Phaselolusradiatus), Babila (Sidacordifolia) etc. and are very effective.

– Dasamula Arishta, which contains several ingredients, including herbs and roots such as Aswenna, Polpala, Elabatu, Katuwelbatu, Hinnerenchi, Beli, Midi, Thotia, Palol, Et demata and other herbs, is also given orally to balance the Vata Dosha and as a tonic.

-Ashwaganda Choorana – orally taken herbal powder. Dosage: one teaspoon, twice a day with milk. It contains a medicinal plant named Ashwaganda-With aniasomnifera, which has a mainly rejuvenating property and acts as a nerve tonic.

Following treatments are also given depending on the patient’s condition.

-Pinda Sweda Treatment (Mild oil massage is administered to the patient with the help of special milk rice medicinal bundles made of cheesecloth.

-Prospects of cure depends on the severity and complications of the disease. If in early stages, disease can be retarded, and symptoms can be controlled.

-Minimum period of treatment in order to see improvements should be more than four weeks.