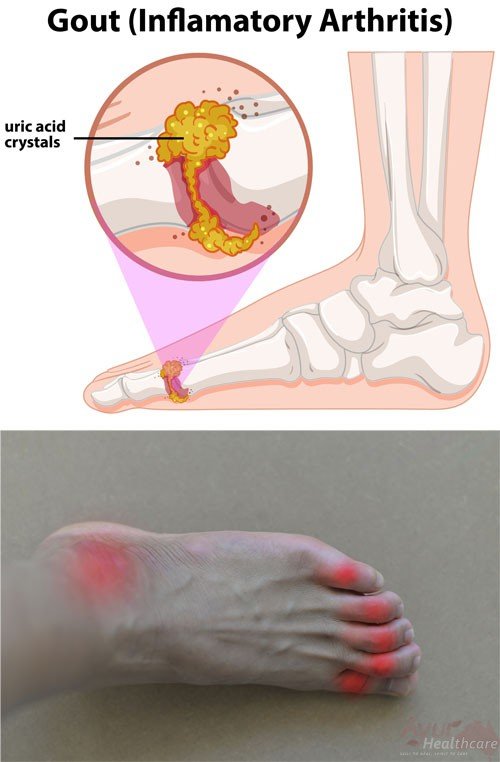 The term “Gout” is derivation from a Latin word “gutta” which means “a drop” indicating the large lump of urate crystals or deposits. Gout has caused suffering in countless humans since the days of Hippocrates or even before and therefore is often studied by physicians.

Gout is a unique type of arthritis which causes severe pain and swelling in almost all the joints but it most commonly affects the big toe (approx 75 % of first attacks). It may also affect the heel, ankle, wrist or elbow. Gout usually appears suddenly and stays for around 5-10 days and can keep on recurring. It is different from all other types of arthritis because it occurs when there are high levels of uric acid circulating in the blood, which can cause urate crystals to settle in the tissues of the joints. Gout is more common in overweight people and the risk of developing the disorder increases with higher body weights.

In the present era due to rapid modernisation in the developing countries like India has given rise to an increase in the number of joint disorders because of the culture of fast food, sedentary changes in lifestyle etc.

Diet, lifestyle and environment are multiple causes which causes derangement of function within the body thus resulting in a disease to manifest in a gradual way. In the initial stage there may be absence of the symptoms but in later stage there may be complex manifestations involving more than one joints.

In the human body and components of DNA, Purine is one of the nitrogen bases. The enzyme Xanthine Oxidase converts this purine and uric acid, which is usually eliminated through urination on a daily basis. Due to improper metabolism or reduced renal function there is excessive deposition of uric acid in the body will lead to gouty arthritis. Intake of food rich in purine food and alcohol, suffering from obesity, hypertension with positive family history are some of the reasons for improper metabolism.

Vatarakta (Gout) is the disorder which disturbs day-today life of the patients where pain is a predominant symptom. Vatarakta is caused by vitiation of Vata(air and space) and Rakta (Blood). Aggravated Vata is blocked by vitiated Rakta, which further leads to aggravation of Vata. This aggravated Vata in turn vitiates the Rakta leading to a condition called Vatarakta. The vitiated Rakta gravitates and finally accumulates in the feet. In the initial stage, the hands and feet are usually affected. The illness then further spreads all over the body just like rat poison. Due to the nature of fluidity, mobility and subtle nature of Vata and Rakta it moves all over the body. While moving through the blood vessels, they get obstructed in the joints which further aggravates leading the morbid matter to get lodged.

Gout presents with sudden, unexpected, excruciating pain along with burning, swelling, redness, warmth and stiffness in the joint. Low grade fever may also be present. There are usually two sources of pain. Whenever the affected area is moved, the crystals inside the joint cause intense pain and the inflammation of the tissues around the joint also causes the skin to get swollen, tender and sore if it is even slightly touched.

TYPES OF GOUT ACCORDING TO AYURVEDA

Acharya Charka describes it to be of two types i.e Uttana (superficial) or Gambhira (deep seated).

In Ayurveda a detailed description of Vatarakta chikitsa is discussed in all texts along with lines of treatment, being Shodhana (internal purification), Shaman (palliative medicine) and Bahyachikitsa (external treatments on body). which is a very effective treatment and is eventually the need of the hour.