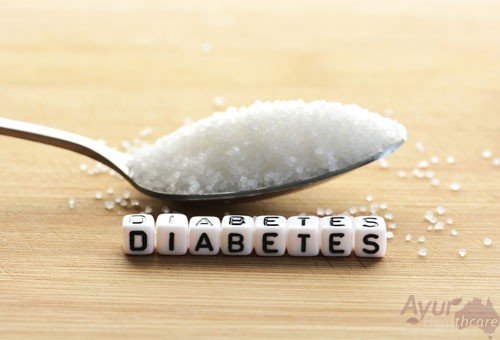 The word Diabetes has been derived from two words, Diabetes (Greek) which means ‘siphon through’ and Mellitus (Latin) which means ‘Sweetened with Honey’. Diabetes Mellitus is a Metabolic disorder, i.e. it is caused due to the malfunctioning of the pancreas, which is responsible for the production of the Hormone Insulin.

Diabetes Mellitus is a chronic condition where the Body is unable to produce or process the Insulin, the food we consume is converted in Glucose, Insulin aids the cells in absorption of this glucose. When above mentioned condition occurs in body i.e. affected by Diabetes, its result in the body being unable to process food properly for energy. It leads to various other complication like weight Gain, Cholesterol, Cardiovascular Disease etc.

Diabetes can strike anyone, from any walk of life. Today, more than 30 million Americans have been diagnosed with Diabetes. Worldwide, more than 422 million people have Diabetes.

In Ayurveda, Diabetes is known as Madhumeha (Madhu means ‘Honey’ and Meha means ‘Urine’). Medhumeha is categorised as Vataj Meha (a problem caused by aggravation of Vata Dosha). Vata is an Ayurvedic humour symbolising Wind and Dryness. Deterioration of the body is a characteristic that indicates impairment of Vata. Maximum deterioration of ‘Dhatus’ (Body Tissues) occurs in this type of disease and this is the reason why all vital organs are affected by Diabetes.

Different causes are associated with each type of Diabetes, there is no specific factor explained in Medical Text which causes the Diabetes, for some reason the Immune System mistakenly attacks and destroys the insulin producing Beta-Cell in Pancreas. (This situation called ‘Auto-Immune Disorder’)

It’s also possible that a virus sets off the Immune System attacks, some common factor which is responsible for manifestation of Diabetes is …

Type 1 Diabetes Mellitus…. is an Autoimmune Disease where the individual’s body has destroyed the insulin producing cells in the pancreas, giving rise to increase in blood and glucose level in the body. The symptoms are frequent urination, thirst, hunger and drastic weight loss.

Type 2 Diabetes Mellitus… This generally occurs when we age or turn obese. In this case, even though the body is producing insulin, its sensitivity is reduced to minimal and doesn’t respond as well as it should. The symptoms are similar to Type 1 and also include fatigue, vision impairment, slow healing from cuts and wound.

Gestational Diabetes occur in women’s during Pregnancy, who didn’t have Diabetes. most women with Gestation Diabetes don’t have any symptoms, often detected during routine Blood Sugar Test or Oral Glucose Intolerance Test, usually performed between the 24th and 28th weeks of Gestation.

Note – All kinds of medicine have side effects. But Ayurveda is considered the best natural medicine for Diabetes. The Natural Herbs which were being used in the last 5000 years in Indian Ayurvedic medicine do not have any kind of side effects. Natural Ayurvedic Herbs are a great boon to the Diabetic patient.

In Ayurveda literature, Diabetes named as ‘Madhumeh’ or ‘Prameha’, The prime cause explained as Impaired Digestion, Impaired Digestion leads to accumulation of specific digestive impurities (Known as ‘Aam’) which accumulated in Pancreatic cells and impair the production of Insulin.

Ayurveda further added this ‘Ama’ is become responsible factor for aggravation Vata Dosha(One of Principle Dosha in the Body, responsible for Movements and Function of the Body) and Vata is impaired/obstructed, Ojas that is sweet in nature is transformed into astringent that makes it honey-like in nature. Obstructed Vata causes all the tissues of the body to deteriorate which affects all the Vital Organs.

– The treatment of Diabetes recommended in Ayurveda as against Modern Medicine, aimed at rejuvenating the body to not only Balance Sugar Levels, but also foster a positive change in the patient’s life.

Ayur Healthcare provide proper screening of patient and treatment for Ayurvedic treatments for Diabetes range from internal, Herbal Medications to purifying Panchakarma procedures such as Vamana, Virechana, Vasti etc., based on the severity of the condition. These natural remedies are intended to enhance insulin sensitivity of type – 4 glucose receptors, thus reducing insulin resistance, and also to enhance insulin secretion and regeneration of beta cells.

Yoga helps in controlling diabetes. This is mainly because Yoga keeps a check on the causes of Diabetes. Stress and Obesity are main causes that can lead to Diabetes. Regular yoga practice with meditation reduces stress and slows down the fat accumulation in the body. Pranayam, surya namaskar, balasana, vajrasana, sarvangasana, halasana, dhanurasana are few of the postures that are effective.