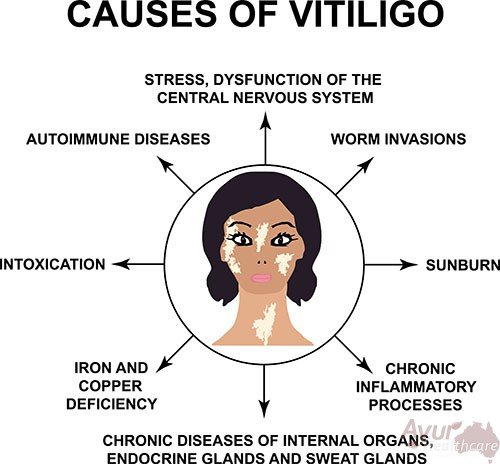 Vitiligo is a disease that causes the loss of skin colour in blotches (large irregular patch). The extent and rate of colour loss from vitiligo is unpredictable. It can affect the skin on any part of your body. It may also affect hair and the inside of the mouth. Normally, the colour of hair and skin is determined by Melanin (Skin Pigment).

Vitiligo also called as ‘Leucoderma’ is an Autoimmune disorder wherein the Immune System of the body attacks the healthy cells and, in turn, starts affecting the body. The condition is characterised by white patches on the skin that develops as a result of melanocytes within the skin.

[Note -According to Modern System of Medicine (Allopathy), There is no cure, and it is usually a lifelong condition. The exact cause is unknown, but it may be due to an autoimmune disorder or a virus. Treatment options may include exposure to UVA or UVB light and Depigmentation of the skin in severe cases.]

Vitiligo or Leucoderma is a fairly common pigmentation disorder in which Melanocytes (the cells that make pigment) in the skin are destroyed which is affecting nearly 2% of Population of world, white patches appear on the skin in different parts of the body. Similar patches also appear on both the Mucous Membranes (tissues that line the inside of the mouth and nose), and the Retina (inner layer of the eyeball).

The hair that grows on areas affected by Vitiligo sometimes turns white. The most widely accepted view is that the depigmentation occurs because Vitiligo is an Autoimmune Disease (disease in which a person’s immune system reacts against the body’s own organs or tissues)

Like we said above, no exact cause known for this disease manifestation, Its Auto-Immune disorder but some possible cause may be Neurological or Auto-Cytotoxic origin (As per Research)

Vitiligo said to be associated with certain Auto-immune disorder and Inflammatory disease such as Thyroid, Diabetes, Psoriasis and Pernicious Anaemia.
–    In some case it’s may be Hereditary, Children whose parents have the disorder are more likely to develop Vitiligo.
–    A trigger event, such as sunburn, stress or exposure to industrial chemicals
–    Some time, appear with chronic gastritis disease
–    Intralesional steroid Injections
–    Using sticker or Tattoo on skin.

Generalised Vitiligo- Most common, Discoloured Patches many parts of body
–    Segmental Vitiligo- Only one side of body, generally occur young age, 1 or 2 years after progress stop
–    Focal or Localised Vitiligo- specially a part of body

In Ayurveda literature, Vitiligo or Leucoderma is co related with ‘Shweta Kushtha’ or ‘Kilasa’ or ‘Switra’ and classified in to ‘Kustha Roga’