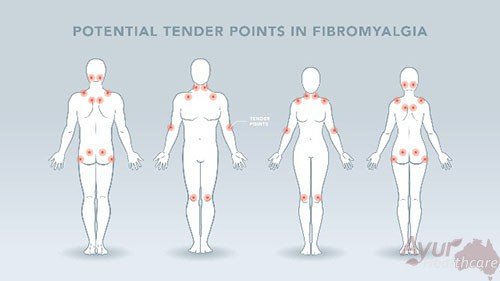 Fibromyalgia is relatively common disorder associated with widespread musculoskeletal pain and tenderness in the nape (back of neck region) of the neck, Trapezius muscle, medial border of Scapulae, gluteal region, forearm and medial side of the knee. It is associated with local swelling and reactive hyperaemia at these tender spots. The nature of pain is deep throbbing, shooting and stabbing and often with burning sensation, (Also knowns as Fibrositis).

In General, this condition is seen most commonly in young women who are otherwise healthy but often stressed, tensed, depressed, lack of proper sleep and anxious. Symptoms are often worsened by emotional and physical stressed. There is history of poor sleep and lack of freshness when wake up in the morning. Usually the onset of symptoms is gradual.

-Researchers believes that fibromyalgia amplifies painful sensation by the affecting the way brain processes pain signal. Ayurveda treatment consist of explanation of the disorder (No Major cause) along with local Massage and ‘Nadi Swedana’. Relaxation and Muscle toning exercise of the affected area are helpful

True cause is still undermined but as per latest research multiple hit theory that involves genetic disposition (Heredity) by some trigger like as explained below.

– Infection – A past illness may be worsening the symptoms such as Flu, Pneumonia, GI Infection, caused by Virus likes Salmonella link to the Fibromyalgia manifestation.

– Genes – Often it is seen fibromyalgia runs in family. You are at Higher risk of Fibromyalgia, if you have a family member with this condition

-Trauma – This condition link to Post Traumatic Stress Disorder (PTSD), Usually those people who have gone through a severe Physical or Emotional trauma.

– Generalize stiffness or aches at many sites of body for more than 3 months.

– Generalized fatigue with Headache with Migraine

– Swelling with Tingling sensation or Numbness

-Hypersensitivity to cold or Heat

– Dryness in Mouth, Nose and Eyes

In Ayurveda, there is ‘Vata-Vyadhi’ is mentioned which is quite similar to Fibromyalgia known as ‘Mansa Dhatugat and Mansavrut Vata’ and as per success treatment history of Fibromyalgia, Ayurveda believes main causative factor is ‘Vata Dosha’ Imbalance.

According to Ayurveda, Vata is main accumulated Dosha, get aggravated and destabilizes the Nervous System and create Hypersensitivity leading to pain and tenderness. Accumulation of ‘Aam’(Toxins) and ‘Shrotoavarodh’ (Blockage of Circular Channels) are also contributory factors.

Ayurveda further explains toxins within the body are considered as the root cause of many Autoimmune disorder like Ankylosing Spondylitis, Rheumatoid Arthritis and disease like Arthritis. Toxins block the channels of circulation to affected area.

In Ayur-Healthcare, first line of treatment of Fibromyalgia, aggravated Vata and accumulated Toxins will be tackled and flush out the toxins out of the body with correction of the digestion system with constipation and effect of chronic stress.

Panchakarma Therapy’ is highly effective in case of Fibromyalgia. The ‘Snehan’ (Pre-purification Measure through Massage by herbal medicated oil) and ‘Swedan’ (Sudation or Sweating through Medicated Herbal Smoke) are very useful in balancing of ‘Vata Dosha’ and loosen the ‘Aam’ (Toxins). ‘Snehan’ given first and after ‘Snehan’, immediate ‘Swedan’ will be given. Herbal Decoction may be added to enhancing the effect.

Hot, Fried Food, Spicy Food, too much Tea, Coffee, Alcohol, sleeping during the day time and Staying up late at night should be cut down from the daily lifestyle.

-Do not hold natural urges, because as per Ayurveda, natural urges are signal to the an individual to act, need to be attended immediately prevent toxins.