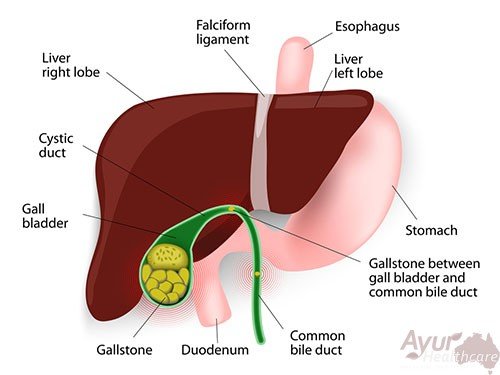 Gallbladder is an organ that lies underneath the liver. Bile is secreted from the liver and is stored in the gallbladder. Then gallbladder contracts which leads bile secretion into the intestine. During this process of contraction of gall bladder number of hormone levels increases. Due to this some of the chemical which exist in the gallbladder solidify into large stone or several small stones which gets stored in the gallbladder which is usually silent in nature but can lead to pain sometimes. Gallstones are also popular by the name of Cholelithiasis which means a condition where stones which can be present in either in the gallbladder or the common bile duct. This stone can block the passage of the normal flow of the bile if they get lodged in the ducts carrying bile from the liver to the small intestine. These ducts are hepatic duct, cystic duct or the common bile duct.

Gallbladder stones can be seen from the age of 15 years to 85 years but most commonly seen in the age group of 31 to 60 years. The prevalence of Gallstones is around 6% to 9% in the adult
population. Age, Gender, diet and sedentary lifestyles play a major role in the prevalence of gallstone.

It is found there is no specific cause of gallstones but it is found that the people suffering from gallstones usually have excess Cholesterol, excess Bilirubin and history of obstruction in the bile duct. There are basically 3 types of gallstones namely cholesterol gallstones, pigment gallstones and mixed gallstones. Cholesterol Gallstones is the most common type of gall stone which is composed usually of cholesterol which is secreted by the liver and is yellow-green in colour. Pigment gallstones are usually composed of calcium salts or bilirubin and are dark brown or black in colour. Mixed stones are basically cholesterol stones which are acted by the bacterias of the body and immune cells used to break down bilirubin. The chemical composition of the stones gets disturbed and they resemble pigment stones to some extent.

Gallstones are usually silent in nature and do not produce any sign and symptom. But it is observed that if they are not treated for many years may produce following symptoms. Presence of excruciating pain is usually felt in the upper right part of the abdomen. Colic pain due to obstruction in the bile ducts followed by nausea and vomiting. Inflammation associated with fever and chills are seen in case of infection in the gallbladder due to gallstone Swelling, tenderness, inflammation of pancreas, bloating, indigestion, heartburn are other symptoms in the gallstones.

In Ayurveda gallbladder stones are correlated to ‘Pittashmari’ which is caused by the vitiation of all the three doshas, Vata, Pitta and Kapha. Excessive consumption of pitta food like hot, spicy food and high amount of alcohol, etc. causes the formation of the stones. Excessive kapha food like fatty heavy foods mixes with the pitta and produce as highly sticky mixture whereas vata causes this mixture to dry up and mould it into the shape of stone.The treatment basically focuses on liver cleansing medication and herbs which restore function of the liver. Panchakarma treatments like Herbal enemas and induced purgation also plays a important role in the treatment.