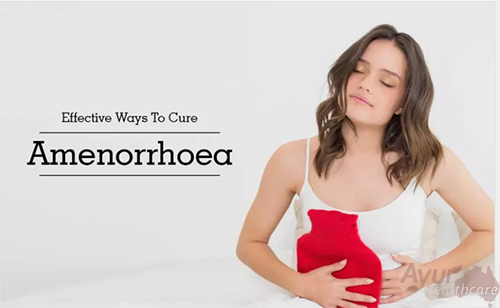 Amenorrhoea (Anarthava – Ayurvedic name) is defined as the absence of a menstruation in a woman of reproductive age, for a period which is twice that of the normal menstrual cycle of a women who has menstruated previously (called Secondary) or the non-appearance of menstruation in a girl who has reached the age of 16.

Amenorrhoea is a normal (Physiological) occurrence in girls before Puberty (Menarche), during Pregnancy and Breastfeeding (Lactation) and following Menopause, it is considered as symptoms of functional and structured abnormality of Female Reproductive System.

Amenorrhoea is not a Disease and it does not mean that a person is infertile, but it can a sign of health problem that need some attention

(Note – for the treatment of Amenorrhoea, many options available in Ayurveda while in modern medicine we have very few options like HRT which have certain limitation for its use and have side-effect.)

-Eating Disorder (Anorexia Nervosa and Bulimia, caused by the nutritional deficiency and deterioration of the body tissues)

-Disorder or Problem in reproductive organs like Uterus, Ovaries, Fallopian Tubes and Vagina.

In Primary amenorrhoea, Menarche does not occur even the girl is over 16 Years. Primary Amenorrhoea associated with

– Main Symptoms is lack of Menstruation

In Ayurveda Scripture, Amenorrhoea known as ‘Anartava’, which literally means the absence of ‘Artava’ (Monthly cyclical Bleeding or Menstruation), Its an condition which is mentioned in ‘Stree Roga Chikitsa’(Female Related Disease), another name also there as ‘Nashta Artava’ i.e. ‘Nashta’ means ‘lost’, destroyed or missing’ while ‘Artava’ means Menstruation.

– According the ‘Charaka Samhita’ (Classic of Ayurveda), Due to aggravation of ‘Vata Dosha’, Gynaecological disorder appears in women body, so balance of ‘Vata-Dosha’ should be the first line of treatment in case of ‘Anaratava’

– Ayurveda believes causes of Amenorrhoea related to condition of ‘Dosha’, like Eating excessively cold, light and dry foods or taking cold or fizzy drinks increases the ‘Vata’ energy in the body. The regular consumption and excessive intake of food that generates gas during digestion aggravates ‘Vata’.

– In the female body, Lower Pelvis or the seat of ‘Apana Vata’(one type of Vata among 5 type) that is responsible for the elimination of menstrual blood, stool, urine and reproductive fluids. Due to anxiety and stress ‘Apana Vata’ increases at the onset of menstruation. There are situations to where aggravated ‘Vata’ causes accumulation of toxins in minute channels, which carry the menstrual blood and blockage of these channels causes Amenorrhea.

Classical Ayurvedic formulation (Only as per the instruction of your Ayurvedic doctor) like Ashokarishta, Ashwagandharishtam, Kumaryasavam, etc..

Spicy and hot diet, which is astringent, acidic in nature, with garlic, onion, nuts, ginger etc. Herbal teas are recommended.

Milk and milk products are good but yoghurt should be avoided, as it causes blockage of menstrual channels.

Excessive use of fried foods, heavy creams and puddings increases ‘Kapha -Dosha’, so it should be avoided.

Do not undertake physical or mental work beyond your capacity, Negative feelings like stress and tension should be avoided.

!!! BRING OUT THE HEALTHIEST YOU THROUGH AYUR HEALTHCARE!!!